Winter Storm Watches are in effect through the weekend as the West looks to get walloped again with more rain and snow in the mountains.

TRUCKEE, Calif. – It’s little rest for the weary for travelers in California trying to get over the passes in the Sierra Nevada as a second storm is barreling toward the Golden State just hours after a first storm blasted the mountains with feet of snow and wind gusts reaching as high as 99 mph.

Winter Storm Warnings from the first storm still lingered along the Sierra Nevada, with fresh Winter Storm Watches already posted for much of the area through Sunday morning.

Another several inches of snow is expected in the region, according to the FOX Forecast Center, with 8 to 18 inches likely around the Lake Tahoe area, but an additional 1 to 3 feet of snow is possible above 7,000 feet in elevation. That’s on top of the feet of snow that fell Thursday and Thursday night.

HOW TO WATCH FOX WEATHER

In addition, another round of strong, near-hurricane-force winds is likely in the mountains, with gusts reaching 70 mph or higher along the Sierra ridgetops. 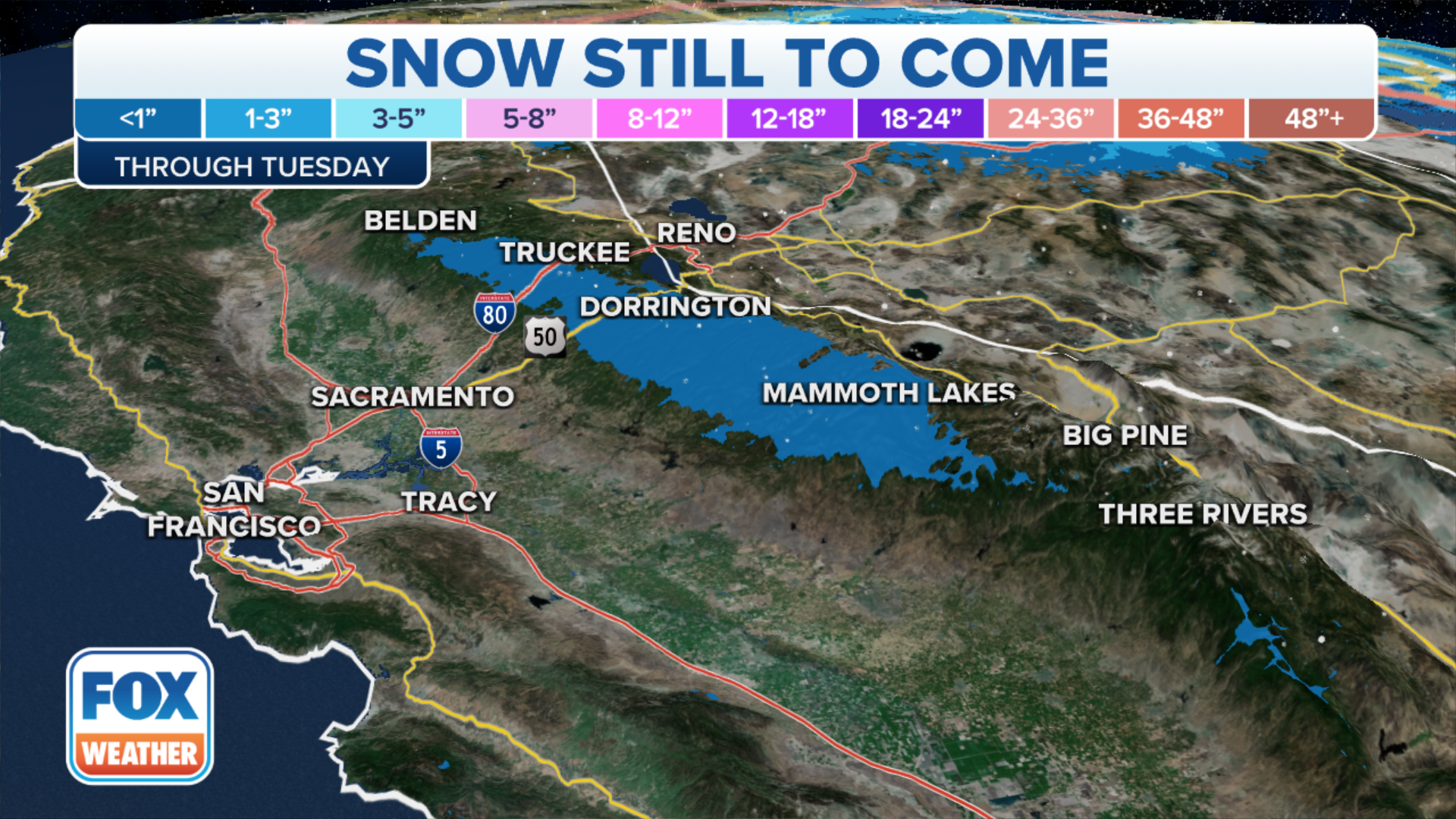 Chains were required across the Sierra highways for much of Thursday, with occasional closures of major arteries and passes due to multiple spinouts, including heavily traveled Interstate 80 over Donner Pass.

CalTrans and California Highway Patrol officials reported several jackknifed or stuck semis, with one being pulled and pushed to safety by CHP vehicles.

HOW TO DRIVE IN ICY CONDITIONS

Snow totals reached over 1-3 feet with isolated areas reporting 4 feet of snow with the first storm. Sierra at Tahoe led the way with 43 inches of new snow.

Ferocious wind gusts made for near-blizzard or whiteout conditions at times, with gusts in the passes reaching 50 to 65 mph. A gust at Conway Summit along U.S. Highway 395 hit 81 mph, while Mill Canyon in California’s Mono County recorded a gust of 99 mph. Even northwestern Reno, Nevada, clocked a gust of 68 mph

TRAVELING THIS WINTER? HERE’S WHAT TO KEEP IN YOUR CAR IN CASE YOU GET STUCK

Meanwhile, continuous wind gusts over 70 mph are likely across the Rockies of Colorado, Wyoming and northeastern New Mexico, with some gusts approaching 100 mph, according to the FOX Forecast Center. Gusts could reach 40 to 50 mph around Pueblo, Colorado, and Cheyenne, Wyoming.

Snow from the second storm is expected to last through Sunday morning.

In the California lowlands, it’s another round of beneficial rains to help at least put a small dent in the ongoing drought. Rain is in the forecast for the San Francisco Bay Area on both weekend days, with widespread rains expected in the Los Angeles basin on Sunday.

The snowpack has gotten off to a great start this fall west of the continental divide. Most mountains have seen between 100% and 300% of their average snow-to-date.

Life in the idyllic NorCal town split into two Americas