The Harvard men’s baseball team split a four-game series at California Polytechnic State University last weekend. Cal Poly kept Harvard’s offense quiet Friday night and during the first game of a doubleheader on Saturday. The Crimson’s offense woke up for the second game of Saturday’s doubleheader to win its first game of the series. The Crimson put on another strong offensive performance to win the last game of the series on Sunday.

Coach Bill Decker said in an interview Friday that he believes part of the reason why Harvard (8-6) struggled in the first two games of the series was because of the team’s long trip to California from Cambridge.

“I think the biggest thing was just the travel factor, coming off the midterm exams,” Decker said. “We left campus at six o’clock on on Thursday night, and really didn’t get into a hotel until one o’clock in the morning.”

“We weren’t really sharp on Friday night, but I thought we played well on Saturday and Sunday,” Decker added. “Guys are resilient, guys kind of persevered through some stuff and got a couple victories.”

The Crimson was shutout by Cal Poly (9-9, 2-0 Big West) on Friday night as it dropped the first game of the series 5-0. The Mustangsstarted sophomore right-handed pitcher Drew Thorpe, who threw a complete game shutout. Thorpe struck out 11 batters, allowed zero walks, and gave up only three hits over 118 pitches.

Harvard started junior right-handed pitcher Adam Stone, who lasted only four innings. Stone had trouble finding the strike zone from the start of the game. With two outs, Stone walked three consecutive batters in the bottom of the first inning before getting the next batter to ground out to strand the bases loaded.

The game remained scoreless until the fourth inning. After retiring the first two batters he faced, Stone again loaded the bases on walks. The next batter hit a routine fly ball to right-center field that should have ended the inning, but junior center fielder Hunter Baldwin and sophomore right-fielder Ben Rounds nearly collided attempting to make the catch, allowing the ball to drop and two runs to score. Rounds was charged with an error on the play.

Over the four innings he pitched, Stone gave up one hit, three unearned runs, and nine walks while only striking out two. Freshman right-handed pitcher Tanner Smith pitched two strong innings in relief, striking out four batters while allowing no runs, hits or walks. Sophomore right-hander Porter Jordheim came in to pitch the seventh and eighth innings where he also struggled against the Cal Poly lineup. Jordheim gave up two earned runs and allowed four walks and two hits while striking out two. 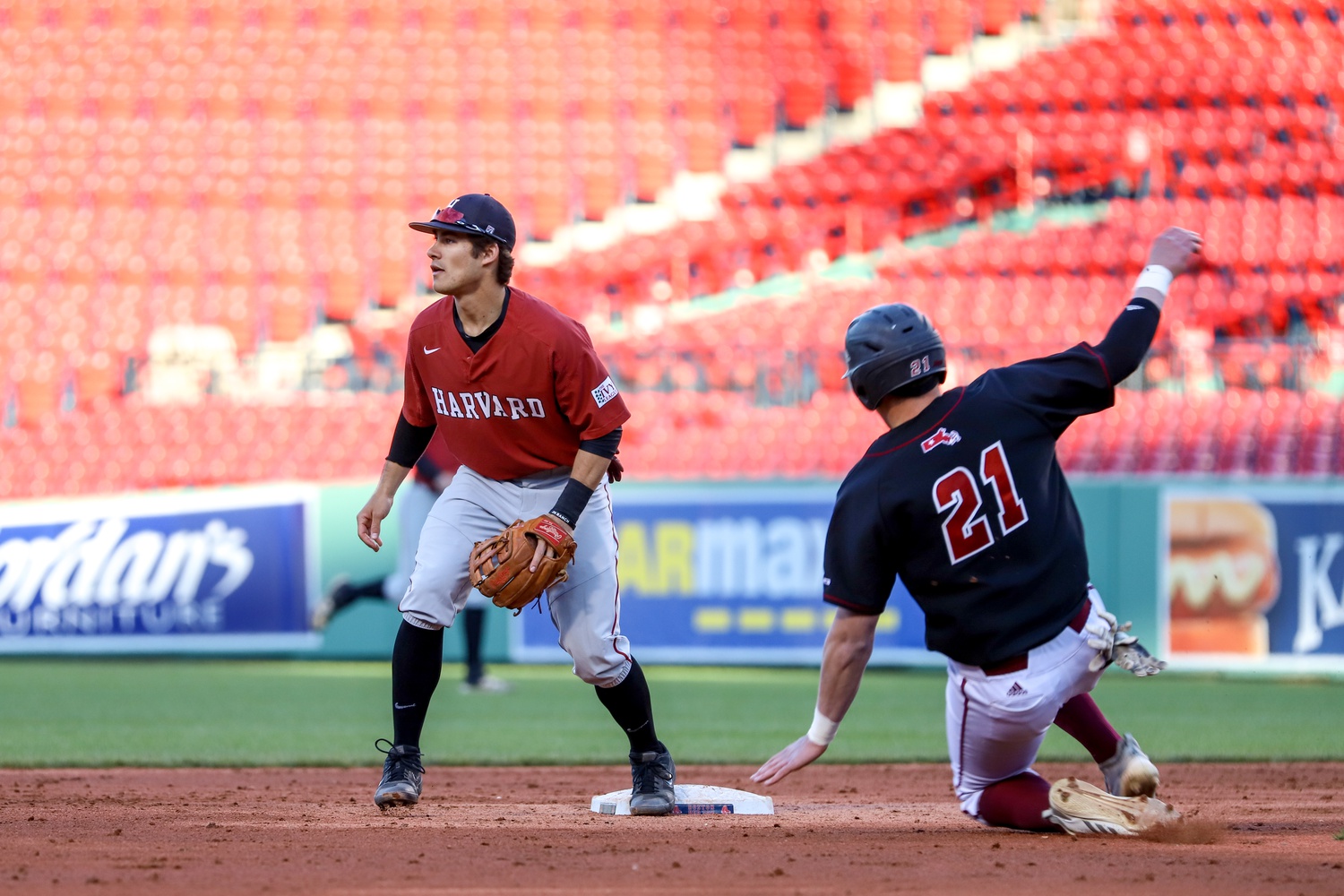 Then-freshman infielder Hunter Baldwin, now a junior, attempts to make a play at second base in the Beanpot Championship on April 17, 2019. By Quinn G. Perini

The Crimson’s offense managed to get 11 hits against the Mustangs during the first game of Saturday’s doubleheader. Nevertheless, Harvard mustered only one run as it dropped the second game of the series 10-1 in what junior captain Logan Bravo called a “tough loss.”

Junior left-handed pitcher Tim Williamson started for the Crimson. Harvard fell behind early after Williamson gave up a solo home run in the bottom half of the first inning. In the fourth inning, Williamson gave up six runs — including a grand slam — which gave Cal Poly a 7-0 lead.

Williamson gave up seven earned runs, five hits, and five walks over his five innings of work to earn his first loss of the year. Junior right-hander Ian Buckner allowed one run over two innings of relief and senior right-hander Joseph O’Connell gave up an additional two runs in one inning of work.

Despite recording 11 hits, the Crimson’s offense was mostly silent during the first game on Saturday. First-year second baseman George Cooper was responsible for Harvard’s only run of the game. Cooper led off the top of the seventh inning by smashing a solo home run to left field. Harvard stranded 13 runners on base, including leaving the bases loaded in the seventh inning.

In the second game of Saturday’s doubleheader, the Crimson managed to hold off the Mustangs and win its first game of the series.

Harvard took the lead early in the game. Cooper led off the top of the first inning for the Crimson and reached base on an error. He managed to get into scoring position on a passed ball and quickly scored after the second hitter of the game, sophomore left fielder Chris Snopek, hit a single to drive Cooper home. Later in the inning, Bravo laced a double down the left-field line to extend Harvard’s Crimson’s lead to 2-0.

The Crimson started senior right-hander Jaren Zinn, who gave up one run over six innings. Zinn struck out 11 Cal Poly hitters and allowed only four hits and two walks to earn his second win of the season.

During the top of the fifth inning, Baldwin reached base on a walk. Cooper then grounded out to first base, allowing Baldwin to advance to second. A batter later, Snopek tallied his second RBI of the game, driving in Baldwin with a single to right field. In the sixth inning, Harvard extended its lead to 4-1. Rounds singled to left field and quickly stole second base to get into scoring position. Baldwin hit a single down the left field line to drive in Rounds for the Crimson’s fourth run of the game.

Cal Poly attempted to stage a comeback in the bottom of the seventh inning, scoring two runs off sophomore right-handed pitcher Chris Clark. Clark only managed to record one out in the seventh inning before Coach Decker brought in sophomore right-hander Jay Driver to get Harvard out of the inning. Driver got two outs in the seventh and stayed in the game to pitch the eighth and ninth innings for Harvard. Over two and two-third innings, Driver allowed zero walks and one hit while recording four strikeouts to secure the win for the Crimson.

Harvard won the last game of the series on Sunday 9-4 to secure the series split against Cal Poly and win its second game in a row.

The Crimson started freshman right-hander Sean Matson in the series finale. Matson allowed two runs in the third inning and another two runs in the sixth inning across a little over five innings of work but still managed to earn his first win of the season.

Sophomore left-hander Uday Narottam came in to relieve Matson in the sixth inning and pitched three and two-thirds’ worth of scoreless innings to secure the win for Harvard and earn his first save of the season.

Cooper led off the game for the Crimson by reaching second base on an error. He managed to score the first run of the game after Bravo hit a single to right field — his fifth hit of the series — to drive in Cooper. An inning later, Harvard added two more runs on RBI hits from Rounds and Bravo to increase the lead to 3-0.

In the bottom of the third, Cal Poly scored back two runs, but in the next half inning the Crimson responded by scoring a run on a fielder’s choice. In the top of the fifth, Harvard increased its lead when Baldwin hit a double to drive home Rounds and sophomore shortstop Jake Berger. The gap was further widened in the top of the sixth inning as the Crimson scored an additional three runs, two of which came on a double hit by Berger that drove in Snopek and junior third baseman Will Jacobsen.

Bravo said that Harvard managed to come back to win the last two games of the series not by making any huge changes to their playing style, but just staying on the same path to victory.

“Honestly, it wasn’t a huge adjustment,” Bravo said. “It was just trying to stay with it rather than freaking out.”

The Crimson traveled to Los Angeles this weekend to play a three-game series with UCLA to close out its California road trip. Adam Stone started the first game of the series on Friday, Tim Williamson started Saturday’s game, and Jaren Zinn started the series finale on Sunday.