ANAHEIM, Calif. — Anaheim tore down a “problem” motels/" 1376 target="_blank">motel as part of a continued effort to clean up and revitalize the city’s Beach Boulevard corridor.

What You Need To Know

The city closed the motels/" 1376 target="_blank">motel, which initially opened in 1961 under a different name, in March 2022, for public health and safety violations and inhumane living conditions, Anaheim spokesman Mike Lyster said.

The Anaheim Housing Authority purchased the motels/" 1376 target="_blank">motel from Helen Pak and Crystal Pak for $6.6 million in December, according to commercial real estate data site Reonomy.

Lyster told Spectrum News the city tore down the motels/" 1376 target="_blank">motel to prevent squatters from living inside and to make way for a new development of affordable housing apartments and for-sale townhomes.

The city hasn’t identified a developer for the site yet, but the plan is to start potential construction in 2024.

“This is Anaheim’s commitment to rebuilding Beach,” Mayor Ashleigh Aitken said in a news release. “Sadly, this motels/" 1376 target="_blank">motel came to symbolize the problems of Beach with human trafficking and drug abuse that destroyed lives and took a toll on nearby residents and businesses. Now, this site represents a bright future as we clear the way for new homes and families who will be invested in a new Beach Boulevard.” 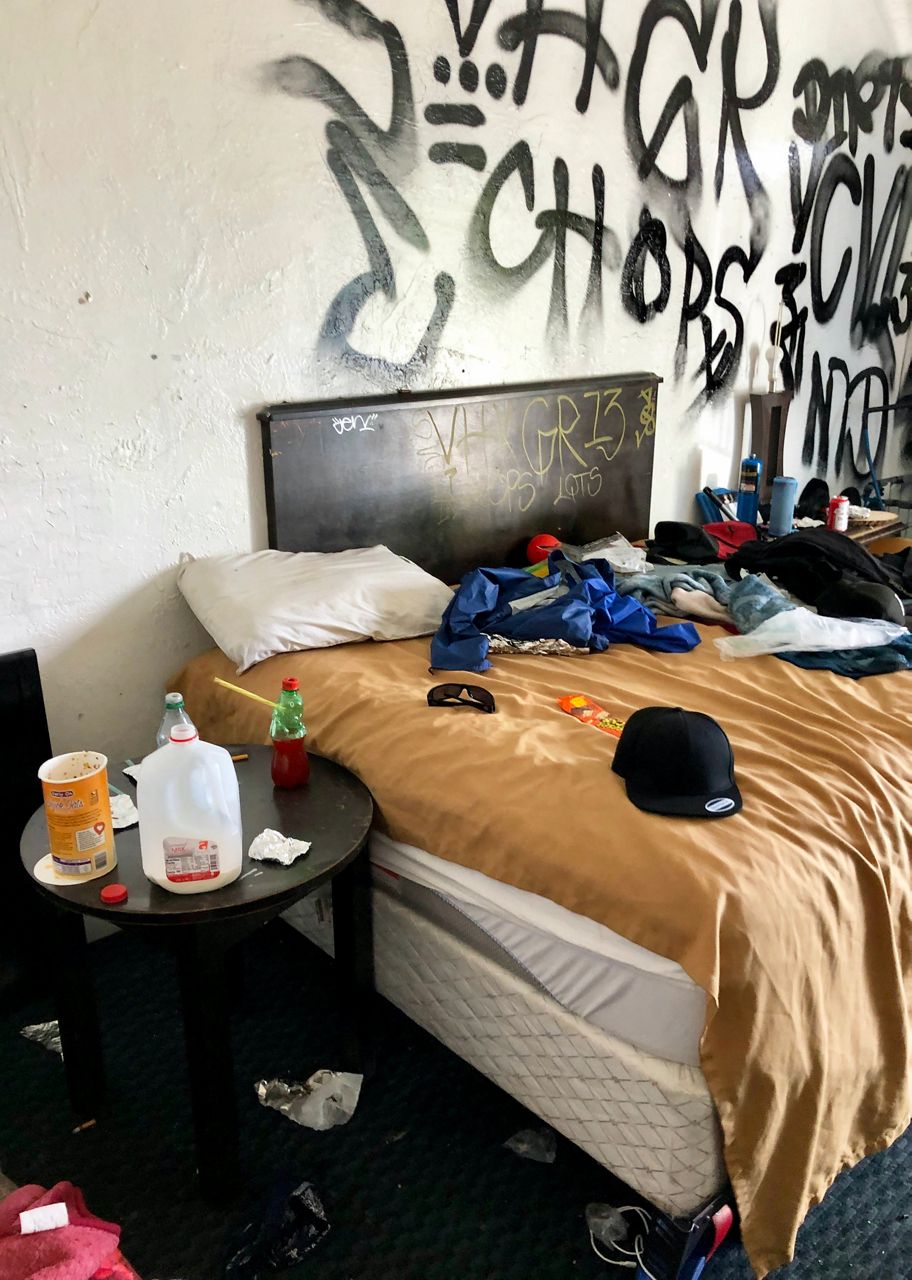 The inside of the former Covered Wagon motels/" 1376 target="_blank">Motel. (Photo courtesy of Anaheim)

While other Orange County cities such as Buena Park, Stanton and Huntington Beach have heavily invested in its Beach Boulevard area with restaurants, food halls, and outdoor malls, Anaheim’s 1.5-mile Beach Boulevard corridor remains a work in progress.

In its past, Anaheim’s Beach Boulevard corridor was an eyesore and crime magnet in the city.

The area, lined with motels built in the 1950s and 60s, attracted criminal activity in some outdated motels from human trafficking, drug dealing, and prostitution, among other issues, city officials said.

Police presence at motels was common, as well as neighbors’ complaints.

There were as many as 19 motels along Beach Boulevard in 2017, but these days there are about 15.

The city, for years, has tried to clean up the area. The city has stepped up police presence, planted high visibility cameras, increased code enforcement, and closed several motels.

The city also purchased a handful of motels to make way for new businesses and housing developments.

Lyster said Anaheim is working to rebuild its Beach Boulevard corridor “as an inviting, walkable, livable street with new homes and thriving businesses.”

Last year, the city installed 50 brighter, energy-efficient LED streetlights along the beach. The city also plans to spend more than $14.5 million to relocate electricity and utility lines from above ground to underground trenches to enhance the look of the street.

Additionally, city officials are talking to the California Department of Transportation to take responsibility for its Beach Boulevard roadway, which would give the city more flexibility in redevelopment, landscaping, medians, and walkways.

Lyster said Beach Boulevard appears to have a bright future.

In recent years, investors and developers have come to the area.

The 65-townhome Nolin Community is nearly complete at Lincoln Avenue and Beach. Plans to construct an adjoining retail center are also in the works.

In 2024 and beyond, Lyster said, there are plans to build even more affordable apartments, townhomes for sale, and retail projects.